Craftivism : Craft and Activism, incorporating elements of craft to expose exploitation.
“I don’t get it, but I get it, if you know what I mean”
A passing father’s response to the stitch-in picnic at Piccadilly train station run, by the Craftivist collective on Sunday April 11th. 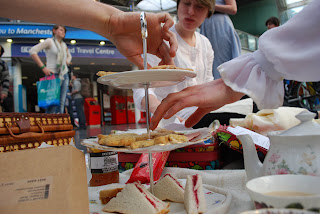 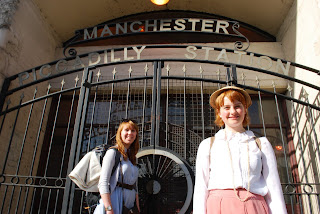 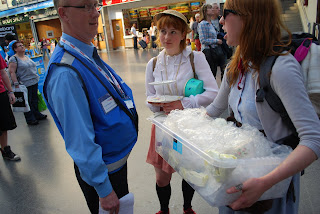 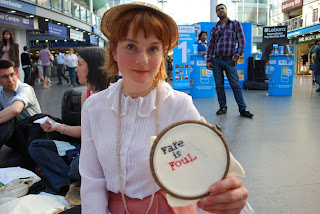 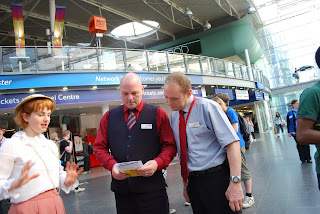 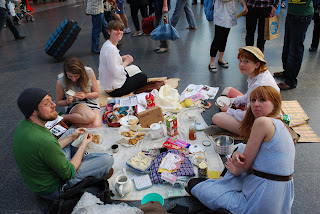 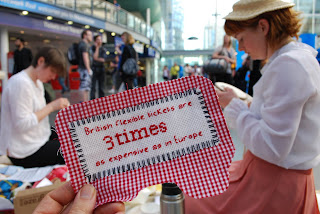 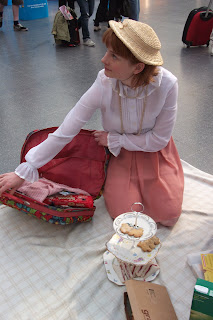 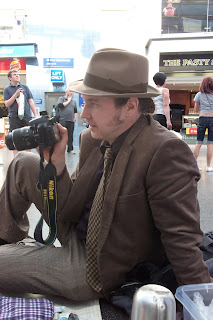 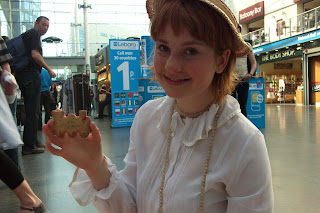 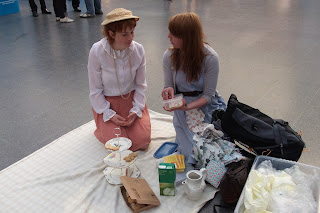 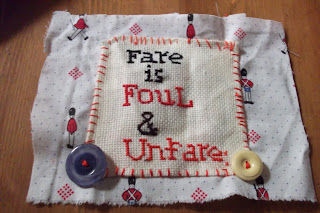 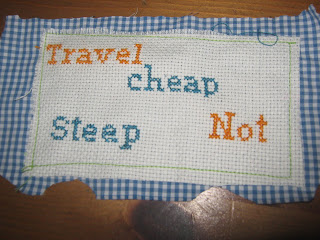 Rebecca Aimée Lanyon Willmott (me) of Craftivism Manchester and Kelly Joseph of Didsbury Green Threads came together to plan the Manchester Crafting a Train of Bunting project. On April 11th this event mirrored train stations across the country, where fellow craftivists stitched, sipped tea and picnicked in peaceful protest against the proposed 31% rise in train fares over the next 4 years. The bunting panels were then fashioned into a petition-train which was taken on a Fair Fare Railway Adventure on Saturday 16th by direct action group, Climate Rush. Check out the video here: Craftivism Film April.  It was  hand delivered to Philip Hammond MP (Minister for Transport) by direct action group

On the Sunday Manchester Craftivists were armed with needles, threads, train biscuits and tea pots, cup and saucers borrowed from tea boutique Sugar Junction. With these tools they were ready to picnic at Piccadilly.

There were security issues to think of when throwing a picnic in the middle of the station, such overcrowding and protesting in a public space.  But the craftivists decided to throw their cheesecloth picnic blankets under Departures nevertheless. Security immediately gained an interest in the indoor picnic set-up and told the craftivists at first not to give out any flyers. They let us distribute after they were informed the event was in fact a peaceful protest.
“You’re just having a pretty picnic, you’re not harming anyone.” Remarked Duke of National Rail in response to our pop up picnic as he took a train shaped vegan cookie from the cake stand.
After laying out the picnic, Craftivism and Green Thread regulars popped up soon after as the stitch- in protesters enjoyed a warm afternoon, sipping tea and stitching under the departures. Members of the public were fascinated by the stitch-in and happily took a Fair fares Now card to voice their concerns over the rise in train fares.
Security even asked when the Craftivists would be returning for another Piccadilly picnic.
Posted by threadsandletters at Sunday, April 24, 2011