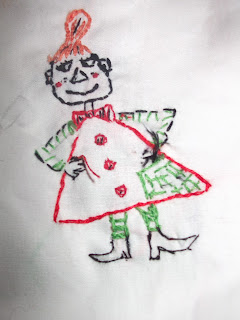 Little My- embroidered by myself at the Moomin Stitch workshop.

Footsteps away from the Bury tram line, and hidden by obscure cobbled architecture is where you shall find The Moomins at  Bury art Gallery. Delighting and attracting an ‘average child of 40,’ the gallery is currently holidaying original illustrations by Tove Jannson, creator of the marvellous Moomin world. The exquisite sketches from early political comic strips to fantastical illustrations for Tolkien's hobbits and Lewis Carroll's Alice in Wonderland  are being temporally borrowed from the Tampere Art Museum in Finland. Which is wholly devoted to Moomin world historicism. The exhibition celebrates the 65th birthday of the nimble fingered characters, along with a production of board books by publishing house, Puffin and a 3D film sound-tracked by Bjork, who was hoped to open the exhibition.
You shall enter the Moomin world by first following the foot prints of light trailing the floor in a drearily lit room, this is where you shall find a playful Moomin valley containing red and yellow chunky wooden ships and a miniature curtained theatre. This subtly mirrors the Moomin Valley tableaux stage at the Tampere and is a playful reanimation of the first Moomin book from 1945, The Moomins and the Great Flood.
Bury art gallery has certainly given an interactive lease of life to the 65 year old hibernating creatures.  with the adult Moomin stitch and children's workshops, including making Moomin puppets and storytelling afternoons, The activities have been held at the compact gallery since the exhibition was opened in October by Tove Jannson's niece, Sophia Jannson. Who also gave a talk on her nimble fingered Aunt at Manchester Literature festival in October. The lantern nosed hippo like creatures have created a Moomin mania across the globe, with the books and comics being translated into over 33 languages. Capturing a specific Nordic mentality in their popularised foraging adventures and melodic forest habitation. Although behind their kitsch presentation the Moomins gloomy ponderings of life, philosophy and nomadic traits encapsulate a buried darker meaning. Tove was a humble hermit herself brought up and inspired by bohemian artistic parents, her life was very much led in happy solitude, obsessively sketching and scrawling scribblings of the broad nosed travellers. The drawings published for satirical Garm magazine and Finnish daily newspapers reflect her melancholic political subtext. This is coupled with thoughts that her prose was very much about ‘what was not said’ suggested in the charming quirks of the Moomin trolls, revealing wiser whispers behind their peaceful hobbit habits and the comic paunchy sketches of dictators depicting a political hypocrisy of the time.
If you are in the Lancashire/ Manchester/ anywhere area, you should most certainly visit Bury art Gallery before the 15th of January.
Posted by threadsandletters at Friday, January 07, 2011