My favourite day is Sunday 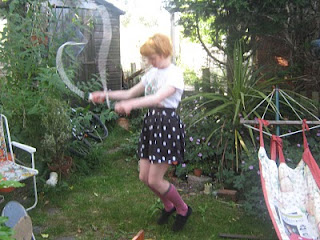 Today I actually got to do most stuff I want to do on a Sunday.
Previous Sundays seemed to be filled with stuff I don't want to do, but today was pretty neat.
First I had a sort of lie in, and I got to wear my lovely vintage nightie I bought yesterday from the new vintage shop on Ullswater Road in Lancaster. I had my coffee and vanilla soya milk and a green apple. I wish mum would put apples in the fridge, they obv taste fresher and crispier that way. I contemplated NOT going for my run as I had been for 5 runs this week totalling over a marathon. :O So I messed about on the laptop and emailed some whole-food companies to see what deals I could get for the food coop/veg box scheme I'm setting up at my uni. (Manchester Metropolitan) I would love it to be like the one they have in Leeds. They do vegan picnics and cookery lessons, cheap veg box scheme and vegan snacks and workshops. I then realised I left my usb pen in the library. Crumbs! So tried phoning uni, but they were closed. (Lazy) I then thought I should go for a run. So I did, I ran up a big hill and took five pounds so I could buy soya milk and a apple on the way back. The soya milk was 79p and the apple 40p. I then went back to buy the Independent on Sunday 5 minutes later. When I got back I tried practising my ballet stretches and slipped on my new ballet shoes. I think my balance is defiantly getting better. Over breakfast I read my newspaper outside with Weetabix and museli and honey and soya yogurt. I then started making my Madeline pinafore dress for Manchester children's book festival. The volunteers were told to dress up as their favourite story book characters. WEll I have so many so I am dressing up as Madeline as I look most like her. I spent most of the day fiddling about with the straps of the dress and my mum helped me with the box pleats. It is sort of finished and it has a matching cape. I'll wear my new boater hat with it also.
My dad phoned asking about some phone. We had a nice walk along Lancaster canal yesterday and saw a little frog and a canal boat cat.
I then roped my brother Harry outside to do some skipping. I purchased a skipping rope from The British Red Cross shop in Watercup where I am doing volunteer work at a Puppet theatre named The Boo. The rope has pinochio wooden heads on each end of the rope. I adore it. After some skipping I was hungry. But today I had to make tea again. Yesterday I made stir fry with peanut butter sauce. Today I made a vegan sausage shepherds pie sorta thing. It was pretty nice.
After tea I was bit bored so had some soya yogurt and Weetabix again.
I phoned a friend, then felt confused as usual and then played with my little sister.
I then put on my nightie and read The Old Curiousity shop with a cup of tea and two ginger biscuits.
Posted by threadsandletters at Sunday, June 27, 2010